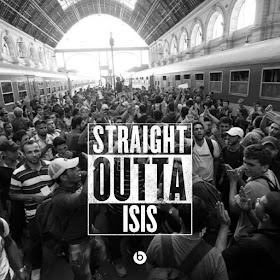 How come all these Lefty feminists are not bothered by the 'patriarchy' of the Syrian refugees?

I thought that during an emergency it is always 'women and children first' and not healthy, smirking and well dressed young guys in their 20's and 30's holding selfie sticks. Like anyone with a sense of human decency, I have no problem with folks with disabilities, young children and their mothers being helped during this crisis. In fact, if human rights actually meant something in this globalist world, this would be the only priority.

We have seen almost none of this so far.

I am not going to be lectured to by some silver spooned Socialist Workers Party types either, because I can see that most of these young male Syrian refugees look like they have recently escaped a shopping mall and not a war zone.

Okay, enough of the barely masked passive aggressiveness, here is my conspiracy theory for the day;

There are more than enough smelly trails to suggest that NATO created, armed and heavily funded ISIS to overthrow the Bashar al-Assad regime in Syria (this also explains why ISIS never attacked Israel).

The Russians called their bluff by putting their troops into Syria with the expressed objective of taking down ISIS. ISIS were already in a mess because the Syrian army had given them a good kicking. When you pay for mercenaries, all you get are psychopaths who are only good for taking photos of themselves beheading prisoners and taking selfies with decapitated heads, but they can't fight when a professional well-trained army comes along.

NATO encouraged the 'evil' social media image of ISIS by making sure that the most graphic depictions of their acts got 'out there' in order to attempt to demoralise the Syrian army, but it backfired and only strengthened the resolve of the Syrian army to destroy ISIS.

Now, the Russians are coming...

NATO panicked, as they knew that any ISIS prisoners the Russians did not kill could be there for all the 'free world' to observe on camera, talking about how NATO was paying them big bucks and arming them. Following the failure of their ISIS trauma-based mind control media psychological operation, NATO may then have gone into damage control mode and thus cynically CREATED this refugee crisis, designed with the specific purpose of getting the ISIS combatants out of Syria before the Russians captured the wrong people.

Then, all the NATO propaganda agencies flooded the media with highly emotive images to get the European citizens to line up to demand that we open our borders and 'save them'. People's understandable emotional response to the real human tragedy behind this war contains within it powerful political capital, and this then cultivates a reaction which is all one sided.

Most certainly it is indeed horrible what is happening in Syria, but this does not make the globalists automatically humanitarian paragons of virtue, nor does it mean they are not playing other games at the same time. It is perfectly fine to question the motives of the same entities who started Gulf War 2 (which led to at least a million deaths) based on their outright lies concerning so called "Weapons of Mass Destruction". I am never going to trust them ever again after that and you are a fool if you automatically trust them now.

To quote Johnny Rotten; 'ever had the feeling you've been cheated.'

For you misty-eyed progressives with your bottom lip trembling defending your absolute and total devotion to Government who might want to proclaim loudly, "that would never happen in a democracy!":

Screaming 'racist!' like a parrot upon reading this post won't make this potentially appalling vista any less unsettling, either. You UKip and similar tossers can piss off too as this is not a political manifesto as I am neither right nor left in my views. A pox on both your houses. I just know Globalist Gaslighting bullshit when I get a sniff of it.